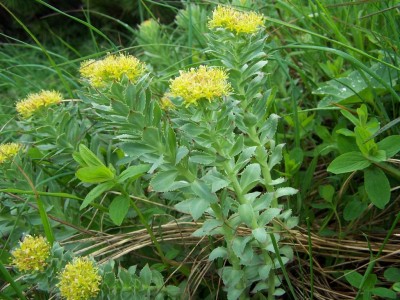 Rhodiola wasn’t an herb I was taught in herbal college, thus it is a fairly new addition to my dispensary cupboard. Yet, the more I learned about this herb, the more I had to have it! Its potential for my clients is too great not to!

Rhodiola (Rhodiola rosea), also known as Stonecrop, Roseroot or Golden Root, among other names, is a member of the family Crassulaceae. This succulent plant is native to various cold climates around the world, including the Alps. This plant may, in fact, prove to be a valuable crop right here in Alberta, with the opening of the “World’s first Rhodiola rosea processing facility”, and where we apparently have an ideal climate for growing it.

What’s so great about it?
It is best known for its adaptogenic qualities. An adaptogen is something that improves the body’s ability to adapt to stressors. Adaptogens promote wellbeing, homeostasis, and general good health.

Physical & mental endurance
It’s helpful in preventing fatigue and promoting endurance both physical and mental. Even athletes experienced a noticeable difference, with reduced lactate levels and reduced damage to skeletal muscle from exhaustive exercise . Along with reducing fatigue it increases concentration, learning, and memory, and is beneficial to people with chronic fatigue syndrome. Students may also find this herb helpful because of its ability to improve mental performance. Many studies also mention improved sleep patterns, greater mood stability, greater motivation to study, improved problem solving, and improved exam scores. Even physicians, in one study, experienced significant improvement of fatigue and mental performance during the first two weeks on night duty.

Many of the studies, especially older ones, were done in Russia. It does make me wonder if that’s one of the reasons why they always used to do so well in the Olympics.

Addiction Treatment
Some animal studies are revealing that it may be very useful in treating addiction to opiates and nicotine .

Anti-oxidant.
Rhodiola is also an anti-inflammatory and anti-oxidant, including the ability to scavenge hydrogen peroxide , which may make it a valuable plant for those with an autoimmune condition known as Vitilego.

Anti-microbial
As an anti-microbial, it’s actions in the laboratory and in mice demonstrated activity against the Coxsackie virus, which causes viral myocarditis, an infection that causes inflammation of the heart muscle. It has also demonstrated activity against H1N1 and H9N2 influenza virus . With school starting and cold and flu season coming, this may be another herb worth adding to the household herbal arsenal.

Anti-stress
Most people these days are struggling to deal with stress, and here is where the herb is also shining in lab studies. It is thought that its anti-oxidant activity may be the biggest contributor to this effect. Whatever the mechanism of its action, it has shown in animal (and some human) studies to reduce fatigue , increase endurance , help maintain a normal body weight , and reduce stress . In another, small study, it was helpful for generalized anxiety disorder.

Cancer treatment
It’s actions in cancer studies are also promising, showing an ability to protect non-cancerous cells while causing cancerous ones to die . Such was the case in a study on human breast cancer cells , and another on prostate cancer cells. This ability to protect cells continued even when used with conventional cancer therapy, where it protected (in this case) myeloid cells while retaining or enhancing the effect of the conventional drug on the cancerous cells. In a study using mice, it inhibited tumours including inhibiting the development and spread of lymphosarcomoa Some of these studies also demonstrated that not only does the herb aid conventional treatment, but that it protected the body from the damage that can so often be done by conventional cancer drugs, including liver toxicity, and provided a greater level of safety.

And more
As if that wasn’t enough, this plant had still more to offer, with benefits in diabetes , high cholesterol , and depression , including that it was as effective as the drug fluoxetine .

Cell protection
What caught my attention most while sifting through the medical journals about this herb is its ability to protect cells from damage. Not only did it have protective qualities during cancer treatment, it protected against H2O2 caused cell death , it prevented hypoxia (a condition where parts of the body are deprived of oxygen) , promoted skin health , reduced arrhythmias after short term deprivation of blood supply , protected against muscle damage during exercise , protected circulation in the brain , and even increased the efficiency of DNA repair and protected against mutation. It has shown an ability to protect nerve tissue , and as such may have a role to play in Alzheimer’s , Parkinson’s , and other neurodegenerative and cerebral diseases

Lifespan
But wait, there’s more. Two studies that were done on animals (fruit flies and nematodes) demonstrated that R. rosea increased lifespan , and that lower doses were more affective at this than larger ones.

In my use of this plant so far, I have found it to be an uplifting herb that promotes a feeling of more energy and alertness, but without interfering with sleep. I have even included it in a formula for my dog, which the vet thinks has an auto-immune condition known as Pemphigus. For my clients, I try to keep some on hand at all times in the dispensary.

In a day and age when there is so much advertising of the latest “miracle” herb it’s odd that we haven’t heard more about this amazing herb.

Note: this article was originally published in the Sept 2010 Newsletter

One Reply to “Raving about Rhodiola”