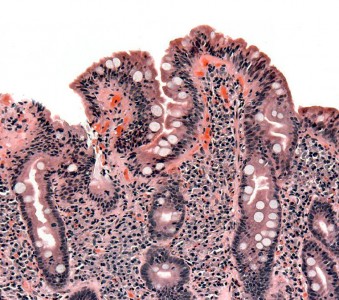 Not that long ago, you didn’t hear the term “autoimmune disease”. Now it seems to be a term that you hear frequently, but what does it mean?

What is an autoimmune disease?

Autoimmune disease occurs when the body has started to see some part of “self” as being foreign and needing to be eliminated. “Auto” in Greek means “self”.

Causes
At this point, no one really knows why the body’s immune system decides to attack the “self“. There are theories though, and here are three.

The first is that there must be some actual defect in either the immune cells themselves, or the immune function; in other words, your genetic makeup.

The second is that some microorganisms (i.e. bacteria or viruses) and drugs may cause or trigger these changes, especially in people with the genetic makeup to be susceptible. This theory is making its way into the mainstream medical community as more studies appear demonstrating this possibility. This includes the now recognized concept of molecular mimicry, where molecules may mimic molecules of the “self”. While there is still controversy over this theory, it is still the following theory that probably has the most controversy.

There are those who feel that vaccines play an important role in the development of autoimmune disorders. The flagship of this theory may be the controversy over autism, which even resulted in the somewhat recent retraction of a published study that had linked autism to a vaccine.

Vaccines are a fairly recent treatment in human history. Our understanding of the immune system is still developing. We start vaccinating children at very young ages (infancy), when we know that their immune system is still in development. Most vaccines are injected whereas most infections come through the body’s orifices, especially the gastrointestinal system, which goes to explain why some 80% of the body’s antibodies are made in the digestive system. More and more vaccines are added to the vaccination schedule as the years progress. With all that in mind it is interesting to note examples such as the following:
In an experimental animal model of autoimmune disease called EAE (experimental allergic encephalomyelitis), if myelin basic protein is injected into an animal it does not cause EAE. However, if it is injected with Freund’s complete adjuvant (a water in oil combination that contains myelin basic protein and dead tuberculosis bacteria) then it causes EAE.

No matter which side of the vaccine debate you are on, it seems wise to challenge what we “know”.

Conventional medical treatment
Today, the modern medical approach to autoimmune disease is largely symptomatic.
• Hormones are used to replace those that are lacking due to damaged hormone glands.
• Enzymes are used to replace those that are lost due damage to the glands that produce enzymes.
• Steroids (i.e. Prednisone) are used to allay the inflammatory response, as are nonsteroidal anti-inflammatories.
• Plasmapheresis can be used to separate excess antibodies from the blood.
• Intravenous immunoglobulin (IVIG) is sometimes used. It can reduce inflammation, enable the patient to ward off disease that they may be otherwise susceptible to due to either the autoimmune disease or it’s treatment, and may help remove some of the abnormal antibodies from the host.
• Immunosuppressants may be used to suppress the immune system response.

Recently, autoimmune disease was something we had to deal with personally in our household when the vet diagnosed our dog with pemphigus, an autoimmune disease that affects the skin. He wanted to put her on drugs to “knock out her immune system” and antibiotics to deal with the secondary infection that was likely to take place in the sores that were developing on her muzzle as a result of the pemphigus. We just couldn’t see using this treatment as the initial treatment without trying the herbal approach first. The vet warned us that this probably wasn’t wise because these cases tend to “blow up” quickly. She was started on an herbal protocol.

Alternative approach
The first theory, above, for the cause of autoimmune disease doesn’t explain the otherwise healthy 40 year old who suddenly develops an autoimmune disorder. Perhaps a better question to ask is “what caused the loss of immune tolerance to self?” Another appropriate question would be, “why is the immune system confused?”

This is where the wholistic approach to health care fits so well, because we have no problem with the realization that each person is an individual, and thus can work with each person according to their individual needs.

One fairly common thread among autoimmune diseases is stress. Many people find that their autoimmune disease responds adversely to stress. So it makes sense to address how you deal with stress, and whether or not you need to reduce sources of stress in your life.

Diet plays an important role in autoimmune disorders. The body needs the building blocks for good health, so good nutrition makes sense. Food may be the source of possible antigens that contribute to dysregulation of the immune system. This may be why some people experience a lessoning of symptoms in Multiple Sclerosis when they eat a gluten-free diet. Furthermore, the digestive system, and the environment within it, plays an important role in the function of the immune system.

An example of where diet can affect autoimmune conditions is Omega 3 polyunsaturated fatty acids (PUFAs) especially EPA (eicosapentaenoic acid) and DHA (docosahexaenoic acid), which have proven to be useful for Crohn’s disease, lupus, and any autoimmune disease where increased levels of interleukin 1 (IL-1) is a factor.

Vitamin D may also be important since it has been observed that if vitamin D intake increases then multiple sclerosis incidents go down .

With all this in mind, lets look at the following aims in herbal care:

Support the reduction in numbers of microorganisms and/or infestations and their toxins
People who are susceptible to Lupus are better protected against malaria , and anti-malarial drugs can alleviate the symptoms of Lupus. Thus Artemisia annua (Sweet Wormwood) may have a dual role to play both for symptom relief, since it is useful for malaria , and because of its traditional use for getting rid of worms and other infestations. Artemisia absinthium (Wormwood) may also be a beneficial herb, especially if A. annua is unavailable.

Licorice (Glycyrrhiza glabra) can be helpful for aiding eliminating certain organisms, and it’s soothing to both the digestive and urinary systems, which can each be involved in some autoimmune diseases. It may also be useful for helping with stress.

St John’s Wort (Hypiricum perforatum) has antiviral properties, which may be very beneficial since many of the viruses that are implicated in autoimmune conditions are the same ones that St John’s Wort is active against. It may have other useful roles to play in other areas, such as protection of myelin sheaths in MS , protecting the lungs , protecting the kidneys , as well as helping with the depression that can so often accompany chronic illness.

Promote proper balance of healthy bacteria
Herbs for this include garlic (Allium sativum) and berberine containing herbs such as Golden Seal (Hydrastis Canadensis) or Oregon Grape (Berberis aquifolium), which are antibacterial and may be particularly useful for supporting healthy bacterial balance in the digestive system. Slippery Elm (Ulmus fulva) or Marshmallow Root (Althea officinalis) are soothing to the digestive system as well as helpful for promoting proper balance of gut flora.

Support the organs that are involved
The liver may be an organ involved in autoimmune disease on several levels since it may be the organ directly involved in the disease, but it is also a major organ for detoxification. Thus, Milk Thistle (Silybum marianum / Carduus marianum) may have a significant role to play in autoimmune disease. It can help protect the liver and support detoxification of prescription drugs being used, as well as support the elimination of other toxins (environmental or otherwise) that may be causative factors.

Tea Tree oil (Melaleuca) and Thyme (Thymus vulgaris) can be useful where there is respiratory tract infection, Bearberry (Arctostaphylos uva-ursi) is a traditional antiseptic for the urinary system, and Burdock (Arctium lappa) is considered a depurative herb. Depuratives help remove contaminants from the gut or tissues.

Support reduction in symptoms
Turmeric may have many possible benefits for autoimmune disease . These include: benefits in Th1-mediated immune disease , it may be helpful against hyperplasia of synovial fibroblasts in Rheumatoid Arthritis , its anti-inflammatory effects

Support modulation of the immune system
Echinacea – The use of Echinacea in autoimmune disease is very controversial. However, if you think about autoimmune disease from the point of view of being a condition of a disordered or confused immune system, its use makes sense. It mostly stimulates phagocytosis (a non-specific immune response), which is not considered to aggravate autoimmune conditions . Whenever I read case reports and studies that say it shouldn’t be used, I find that they are actually inconclusive. For example: In one report, Echinacea was said to be associated with renal tubular acidosis in someone with Sjogren’s syndrome, yet this is a common problem with Sjogren’s, and there were three herbs in the herbal formula the person was using, not just Echinacea . So what really caused the problem? On the other hand, there are more and more studies coming out that demonstrate the benefit of Echinacea in autoimmune conditions, such as one pilot study that showed Echinacea was helpful in autoimmune idiopathic uveitis.

Needless to say, autoimmune disease is a huge subject, and the herbal information here is by no means exhaustive, but I hope it gives you some idea of just how helpful herbal therapy can be for those with such conditions.

In the case of my dog, she is doing just fine with the herbs. Her muzzle is healing up and the hair is growing back. Things definitely didn’t “blow up” as predicted… and yes, I did give her Echinacea, among other herbs.

This article was originally published in the newsletter in November of 2010.
Photo is of a biopsy of the small bowel in coeliac disease.