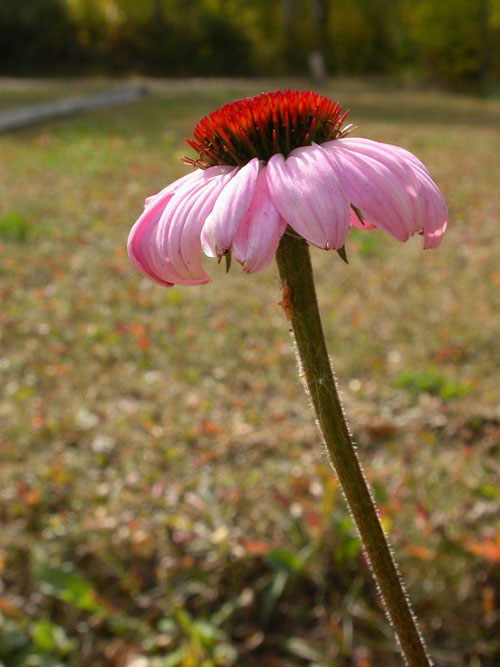 Also known as Purple Cone Flower, Echinacea is a tall perennial plant from the daisy (compositae/asteraceae) family. It grows up to a height of about one meter and is a native to the western prairies of North America.There are three types that are typically used for medicinal purposes Echinacea purpurea, E. angustifolia, and E. pallida. The most commonly used being E. angustifolia and E. purpurea. There are differing points of view on which parts of the plant are best for medicinal use. Some believe that the above ground parts are best, while others believe that the root is best. I prefer the latter for a couple of reasons.

It is interesting to note that the Indians of North America introduced this plant to us for use in snake bite, and it was the root that they used despite the fact that it would be much easier to collect the above ground parts of the plant in such a critical situation. It is also quite useful for insect bites and stings, being both slightly numbing topically, as well as its various benefits on the immune system etc. internally.

Echinacea is considered to be immune-enhancing, immune-modulating, anti-inflammatory, anti-bacterial, anti-viral, anti-allergenic, and a lymphatic tonic. Thus it has been used for septicemia, upper respiratory tract infections, tonsillitis, boils and abscesses. Generally it is considered to have anti-viral and anti-bacterial action when used topically, and when used internally it is immune modulating, immune stimulating and lymphatic.

Many studies have been, and continue to be, done on this popular plant. Despite studies reporting that it doesn’t work, the overall consensus, according to a  review published in the Lancet [6], is that Echinacea does work for the treatment of the common cold. There is however a lot of confusion regarding studies on this plant. There are so many different preparations of the plant, involving different plant parts, different species, different extraction methods, different qualities of materials, and so many other variables that it is difficult (impossible?) to say that all preparations have the same effects, or lack of effects.

Because of it’s ability to stimulate the white blood cells, people are often cautioned against the use of Echinacea if they have any kind of autoimmune disorder, even allergies. However, studies are revealing that Echinacea is more of an immune modulator and as such it is being studied for various conditions including AIDs. A study on mice with leukemia showed that Echinacea suppressed leukemia. Some herbalists use it in cases of autoimmune disorders.

I’ve heard many people say that you shouldn’t take Echinacea for longer than two weeks. This was based on a study that came out of Germany that was mistranslated. In fact, the study showed that Echinacea continues to exert a positive influence on the immune system several days after discontinuing the Echinacea. Yet for some reason this myth, that you can’t take it for longer, refuses to die.

No single constituent has been singled out as the one primarily responsible for the immune stimulating and modulating effects. The constituents all seem to work together.

Good quality liquid preparations of this plants should cause a slight tingling sensation in the mouth and some increase in salivation. In fact some Echinacea preparations (really good ones) can be so strong that, for those who’ve never experienced it before, it might feel like an allergic reaction. There are herbalists that feel the preparations should always be taken in a form (tincture, tea, syrup, or glyceract) that allows it to come in contact with the lymphatic tissues of the mouth and throat in order to optimize its affect.

Adverse reactions are uncommon. If they occur, they are usually digestive upset or contact dermatitis (skin reaction, usually to the flower) in those who are susceptible (those with allergies to the daisy family). Although more serious adverse reactions have been reported, it is unclear whether Echinacea was really to blame. Since in some reported cases it wasn’t clearly established if it was indeed Echinacea, while in other cases other medications were also being taken which were known to cause the same type of reaction that was experienced.

Echinacea is used in many species of animals for the same purposes that it is used in people. Some conditions that Echinacea has been used for in animals include tick bite, ear infections, sores that don’t heal well, and allergies.

A few studies have been done on animals, demonstrating benefits for conditions such as Kennel Cough and other upper respiratory tract infections (Schweiz Arch Tierheilkd. 2003 May;145(5):223-31). Another small study, done with horses, demonstrated a positive immune-modulating effect with both a significant increase in the number of red blood cells and white blood cells (lymphocytes) [7]

Echinacea angustifolia root powder is available for purchase here from our store.

One Reply to “Echinacea”