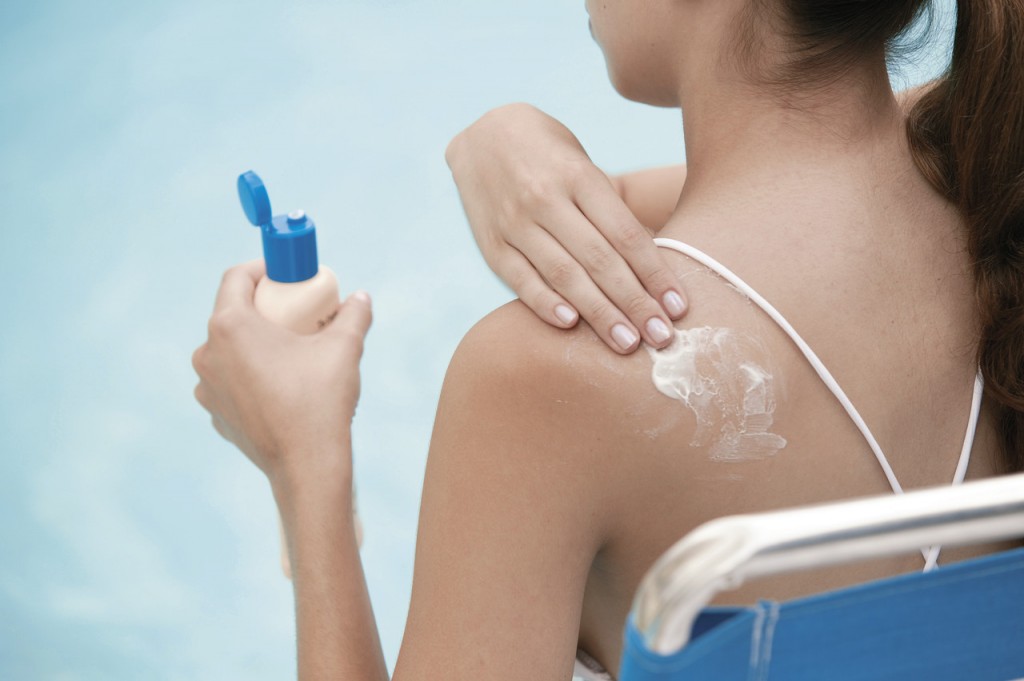 A Google search for sunscreen safety reveals a plethora of articles for, and against, the use of sunscreen. The debate covers three main areas: potentially carcinogenic ingredients, vitamin D deficiency, and inadequate protection.

“Free radicals” or reactive oxygen species (ROS) increase in the skin with the use of certain sunscreen ingredients . This is significant since oxidation is thought to be a major factor in skin damage due to UV exposure, and reduction of cellular antioxidants is a major factor in the development of melanoma
PABA (4-Aminobenzoic acid, a.k.a. para-aminobenzoic acid) is a common ingredient in sunscreens. It is an organic compound that has been found to increase the formation of a DNA defect in cells, increasing skin cancer risk.
Another ingredient, 2-phenylbenzimidazole (PBI), has been found to cause DNA damage when exposed to light irradiation.
Nano-particles are now a frequent ingredient, in the form of titanium dioxide (TiO2) and/or zinc oxide (ZnO). These may not be as safe as expected since there is evidence that ZnO and TiO2 can cause ROS in the presence of light and that this may damage the cells.

The process your body uses to make vitamin D is dependent on UVB, which sunscreens block. Yet vitamin D metabolites actually protect against melanoma.
For a healthy light skinned person it only takes 20 minutes per week of exposing 5% of the body to get the recommended minimum amount of vitamin D. With vitamin D playing a vital role in cancer prevention, it is interesting to note that an estimated 30,000 U.S. cancer deaths per year could be avoided with the use of regular moderate sun exposure.

Inadequate protection and increased time in the sun
Most sunscreens don’t provide protection from the full UV spectrum. Many only protect against UVB radiation and not UVA. This is compounded because sunscreen users tend to stay out in the sun longer because they believe that since they have their sunscreen they are protected.

An article in the journal Melanoma Research said the most significant thing associated with increased risk of melanoma was sunscreen use. Sunbathing, without burning was protective, while sunburning was not protective. It also stated that sunscreens don’t prevent cancer.

The Burning Question – What to do?
Be very aware of your sun exposure. Make sure you get some, but make sure you also have clothing to protect you. I wear a broad brimmed hat, sunglasses, and various clothing including shirts that have an SPF rating of 30.
Outdoor shops carry an interesting assortment of clothing that is ventilated to help keep you cool while protecting you from the sun. While they may seem costly at first they usually work out to be less expensive because they last. I’ve used and abused mine for many years, where cheaper clothing bought at the same time wore out long ago.
Since free radical damage may play a major role in sun damage it makes sense to eat healthfully, including many antioxidant rich food. Conveniently these foods are usually plentiful this time of year. I also moisturize with products that are as natural as possible such as organic olive oil, coconut oil, or body lotion.
Although further study is needed, many medicinal herbs may have an important role to play. For example, Rosmarinic acid, given orally, demonstrated an ability to protect against UV radiation. Plants that contain rosmarinic acid of 25,000 ppm or more include: Heal-All (Prunella vulgaris), Oregano (Origanum vulgare), Clary Sage (Salvia sclera), Marjoram (Origanum majorana), Peppermint (Mentha piperita), Sage (Salvia officinalis), Summer Savory (Satureja hortensis), and Thyme (Thymus vulgaris).
In a preliminary study, a topical formula of Broccoli demonstrated protective action against UV damage. In another study Milk Thistle (Carduus marianum) revealed very protective action, beyond just acting as a sunscreen.
Last year I started experimenting with St. John’s Wort (SJW) infused oil, used topically. This goes against everything I was taught about herbal medicine and SJW, but I didn’t burn last year so we’ll see. It has some merit given its antioxidant properties, the role of free radicals in sun damage, and it’s healing abilities including for sunburn
More research is needed. In the meantime, it’s my personal choice not to use sunscreen.

If you would like the references for this article I’d be happy to supply them. Just email me.