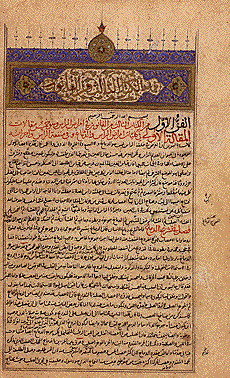 Known in the western world as Avicenna his name was Abu Ali al-Husayn ibn ‘Abd Allah ibn Sina (also known as Ibn Sina). He was born c 980 in Afshana near Bukhara.

While not a “herbalist” per se. He did contribute to the knowledge of healing, writing many treatises, the most well known being

His fame as a physician gained him both advancement and exile or imprisonment, the apparent target of jealousy or misunderstanding by his peers.

While much of Europe was stuck in the dark ages sciences and medicine flourished in the Persian Empire. And many ancient medical texts (such as those of Galen) were preserved thanks to this.

Avicenna is also considered the inventor of distillation, while others would argue that he merely refined the process. He designed the coiled cooling pipe that improved condensation of steam, improved the extraction process for aromatic “oils” from plants, reportedly starting with a Persian favourite… the rose. It is thanks to his work in this area that he is also considered a pioneer of aromatherapy.

He died at approximately the age 56-58 in Hamadan, Persia

You can get a copy (translation) of his Canon of Medicine, and I must admit it’s on my wishlist too.

2 thoughts on “Healers of Note – Avicenna”