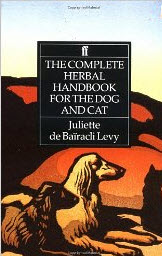 My introduction to Juliette de Bairacli Levy was when I was researching for my thesis on herbal medicine for dogs. Her name kept coming up again and again, apparently for good reason.

Born Nov 11, 1912, she grew up with her mother, father and three sisters, as well as a nanny, chauffeur, maid and gardener. Educated at Lowther College, she went on to study veterinary medicine at the Universities of Manchester and Liverpool for two years. Becoming dissatisfied with what they were teaching in veterinary medicine, she traveled around the world learning from various people, especially Gypsies, farriers, and peasants, how to care for and treat animals naturally.

When her book The Complete Herbal Handbook for Farm and Stable was published in 1951 it was considered the first work of it’s kind ever published, such knowledge having previously been passed down through word of mouth.

In the late 1930s she ran a distemper clinic in London. When asked what she would most like to be remembered for she said she would like to be remembered for “curing canine distemper, which became my specialty.”[1] Her book the Cure of Canine Distemper, as she said, “established the then absolutely unknown herbal work in the canine world and attracted to herbal medicine many of England’s greatest breeders”[2]

Her cure for distemper? Fasting and “generous use of antiseptic herbs”, as well as isolation from other dogs. Done early enough, she says there should be no complications, other than perhaps discharge from eyes and nose, cough, diarrhea, and some fever, with the overall condition resolving in about three weeks. Unless the animal has been inbred, of weak stock, or has been vaccinated recently, in which case there may be complications that include nervous disorders, paralysis, meningitis, chronic diarrhea and much more.[3]

In the 1940s she studied with Edmond Bordeaux Szekely, a Hungarian doctor, where she learned the importance of going beyond treating just the symptoms of disease.

Faber and Faber, one of her publishers, “say that for the past 50 years they have always received more inquiries about Juliette than about any of their other authors who include T.S. Eliot”[4]

Juliette had two children, Luz and Rafik who were born in the early 1950s. She and her children raised owls, hawks, dogs, goats, donkeys and bees in Israel. After that she moved to Greece, where she continued to write (including poems and stories) and gather herbal knowledge.

In her latter years she travelled every summer to America where she gave lectures and workshops about herbal medicine.

In 1998 Frontier Herbs presented her with a Lifetime Achievement Award for her contribution to the herbal world.

To learn more about Juliette de Bairacli Levy and her natural rearing methods check out this and other books written by her.

[3] The Complete Herbal Handbook for the Dog and Cat